Why hallmarking in Australian jewellery is important

The practice known as ‘hallmarking’ is the process of impressing or stamping a series of marks into jewellery using hardened steel punches (in the case of rings, these marks are generally found on the inside) and collectively represent and identify the manufacturer and the quality or standard of the materials used.

These marks signify the pride, commitment and guarantee given to the creation of the piece.

Pieces created in our workshops will generally also carry the craftsperson’s personal mark (often referred to as the ‘maker’s mark’) alongside the Abrecht Bird logo. These marks signify the pride, commitment and guarantee given to the creation of the piece.
Here, at Abrecht Bird Jewellers, as accredited members of the Gold and Silversmiths Guild of Australia, we have the privilege to also stamp the guild mark of a kangaroo head, along with a date stamp indicating the year in which the piece was made.
Shown here are examples of the marks seen on pieces from our studio workshops.

Each plate is read from the left. 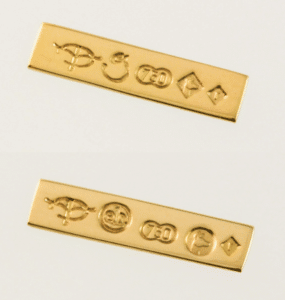  The manufacturer’s mark (this being the company logo) is a symbol of the two highly respected family companies that
formed the present Abrecht Bird Jewellers.
 The maker’s mark – Eleanor Hawke on the image above and
Greg John on the image below.
 Next to the maker’s mark is the quality or standard mark
indicating the precious metal used. In this instance the metal
is 18 ct yellow gold, which is 75% fine gold (750 parts to the
thousand). This stamp is in the shape of an infinity symbol,
the internationally recognised shape for the gold standard.

The Gold and Silversmiths Guild of Australia stamp – the circular shape or frame illustrated here indicates a manufacturer’s accreditation with the Guild, whilst the oblique square frame designates the maker as a Fellow of the Guild.
 The next stamp is generally a letter and designates the year in which the piece was made. The frame shape and letter font will vary from year to year.

The GSGA gives accreditation to worthy manufacturers willing to abide by an ethical approach to producing a standard of quality in unique precious metal products. There is a register of all fellows and members enabling identification and tracing of all stamped pieces. These marks indicate not only the pride with which the jewellery was created, they also give a guarantee to the customer of our commitment to the standard of quality to which Abrecht Bird Jewellers have become synonymous, and like the guilds in the UK and Europe, this provenance adds to the value of the piece. As a highly respected and qualified member of our creative team, Yuki Mathwin is now having her own maker’s mark made for use on her jewellery crafted in our studio/workshop.
Yuki has designed her own personal mark, which will now be converted into a specialised punch. Once the stamps have been made, Yuki’s mark will be
proudly embedded on her creations with Abrecht Bird. 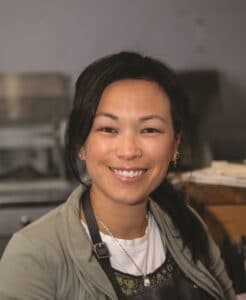 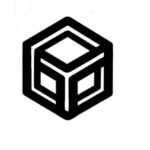 Another of our couples who haven't let COVID-19 dampen their spirits is Henry and Felicity. Like our last feature couple Henry and Felicity also got engaged before stage 3 restrictions.At Abrecht Bird we love making new items of jewellery but we find it so special... 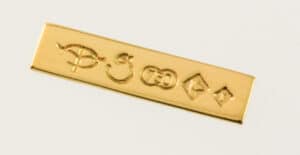